the hepatitis B virus (HBV) that affects the liver. It can cause both acute and chronic infections. Many people have no symptoms during the initial infection. Some develop a rapid onset of sickness with vomiting, yellowish skin, tiredness, dark urine and abdominal pain. Often these symptoms last a few weeks and rarely does the initial infection result in death. It may take 30 to 180 days for symptoms to begin. In those who get infected around the time of birth 90% develop chronic hepatitis B while less than 10% of those infected after the age of five do. Most of those with chronic disease have no symptoms; however, cirrhosis and liver cancer may eventually develop. These complications result in the death of 15 to 25% of those with chronic disease.

The virus is transmitted by exposure to infectious blood or body fluids. Infection around the time of birth or from contact with other people's blood during childhood is the most frequent method by which hepatitis B is acquired in areas where the disease is common. In areas where the disease is rare, intravenous drug use and sexual intercourse are the most frequent routes of infection. Other risk factors include working in healthcare, blood transfusions, dialysis, living with an infected person, travel in countries where the infection rate is high, and living in an institution. Tattooing and acupuncture led to a significant number of cases in the 1980s; however, this has become less common with improved sterility. The hepatitis B viruses cannot be spread by holding hands, sharing eating utensils, kissing, hugging, coughing, sneezing, or breastfeeding. The infection can be diagnosed 30 to 60 days after exposure. The diagnosis is usually confirmed by testing the blood for parts of the virus and for antibodies against the virus. It is one of five main hepatitis viruses: A, B, C, D, and E.

The infection has been preventable by vaccination since 1982. Vaccination is recommended by the World Health Organization in the first day of life if possible. Two or three more doses are required at a later time for full effect. This vaccine works about 95% of the time. About 180 countries gave the vaccine as part of national programs as of 2006. It is also recommended that all blood be tested for hepatitis B before transfusion and condoms be used to prevent infection. During an initial infection, care is based on the symptoms that a person has. In those who develop chronic disease, antiviral medication such as tenofovir or interferon may be useful; however, these drugs are expensive. Liver transplantation is sometimes used for cirrhosis.

About a third of the world population has been infected at one point in their lives, including 343 million who have chronic infections. Another 129 million new infections occurred in 2013. Over 750,000 people die of hepatitis B each year. About 300,000 of these are due to liver cancer. The disease is now only common in East Asia and sub-Saharan Africa where between 5 and 10% of adults are chronically infected. Rates in Europe and North America are less than 1%. It was originally known as "serum hepatitis". Research is looking to create foods that contain HBV vaccine. The disease may affect other great apes as well. 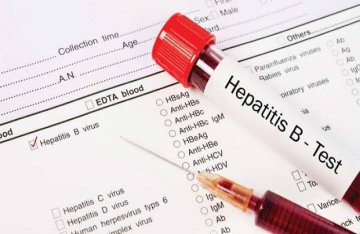